The Lucketts Ruritan Club awarded $5,000 to James Rollison for use toward his studies at the University of Mary Washington, where he will major in Business and minor in Sports Management. James graduated from Tuscarora High School with a GPA of 4.58 and finished in the top 5% of his class, excelling in AP classes in U.S History, Biology, Psychology, Calculus, Literature and Composition, and Language and Composition and Dual Enrollment for Government. In addition to his scholastic achievements, James received the AP Scholar Award and was on the “All A Honor Roll” every semester of middle and high school. James was the Tuscarora Vice President of DECA, which is a national business organization that prepares emerging leaders and entrepreneurs in marketing, finance, hospitality and management in high schools and colleges around the globe. He was also inducted into the National Honor Society and was a French tutor in his sophomore year. He has been a lifeguard and pool operator at the Village Green community pool for the last three years, enjoys playing the guitar and traveling with his family.

James’ passion for soccer emerged at a very early age; his obvious talent was recognized by the coaches at Tuscarora as he was on the Varsity Team all four years of his high school career. This past year, as the team captain, he led them to an undefeated season. The team won the district and regional championships but lost at the state level to their opponent. Overall, however, this season was the best ever for the Tuscarora soccer team.

During high school and now even post-graduation James plays club soccer for Pipeline SC, an Elite Clubs National League (ECNL) team and one of the top teams in the country. ECNL is a national youth soccer league founded for the purpose of providing the highest level of competition and the best developmental environment for American youth soccer players. James will be pursuing his soccer passion at the University of Mary Washington and playing at the college level over the next few years.

As a Tuscarora Key Club member, he participated in Lucketts trash clean-ups, the Lucketts Food Pantry, and the Lucketts Community Closet. He worked the Children’s Book Drive and the Used Clothing Drive. When asked about his community service and what activity stands out as particularly memorable, James did not hesitate to say that his participation with Arlington Cemetery Wreaths Across America was very moving for him personally. He feels this way partly because he laid the wreath at his grandfather’s grave, but also in recognition of the service men and women who dedicated their lives, some giving the ultimate sacrifice.

James’ service within Tuscarora High School and the Lucketts community is a solid example of what it means to be an active citizen who acts locally but thinks globally. The Lucketts Ruritan Club is very proud to support James in this next exciting phase of his life. We wish him the best at the University of Mary Washington. 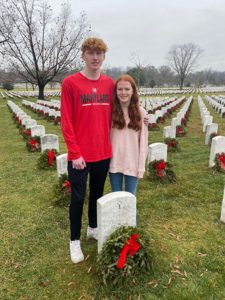 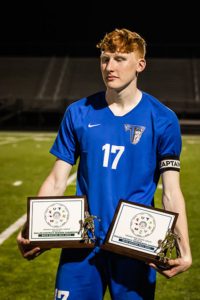